We Hit an Elephant

Already having changed one flat today, the two back tires were now hissing as they rapidly lost air. Since we only had one spare left, we found ourselves racing along a narrow sandy path back to camp in our open-air Land Rover Defender. The windshield was folded down and branches were whipping against the side of the truck due to the thick brush that surrounded us. Suddenly out of nowhere, a baby 8 month old elephant stepped out in front of us. We were going to hit it.

We were in the middle of the Metetsi Private Game Reserve in Zimbabwe. During our first 24 hours here we had already been introduced to the majority of the cast of The Lion King. And now we were about to complete the circle of life by running down a baby elephant.

Our driver and guide, hit the breaks and zigged. Likewise, the baby elephant hit the breaks and zagged. The front end of the Rover just missed the little guy, but he let out an angry, billowing trumpet as our rear fender introduced itself to it's rear hip.

We slid to a stop and watched him run (thankfully with no limp) across the path and back into the thick bush. We made a prompt exit before his unseen mother introduced us to her tusks. We limped back into camp on our flats. 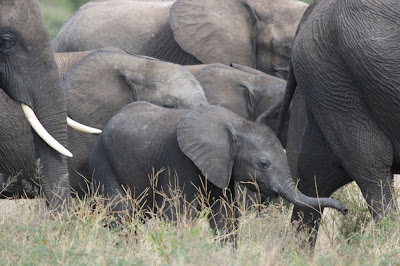